Two U.S. B-1B strategic bombers, newly deployed to Guam, trained in the sky over Korea earlier this week in a show of force and the ironclad alliance against North Korea's threats, the Air Force announced Wednesday.

The sortie, made public a day later, was followed by the North Korean military's threat of ballistic missile attacks aimed at blockading the Pacific island.

The B-1B Lancers of the 37th Expeditionary Bomb Squadron first flew to Japan and then came to Korea in a 10-hour mission from the Andersen Air Force Base in Guam.

They flew together with South Korea's KF-16 fighter jets and performed a pass over the Pilsung Range in the eastern province of Gangwon before leaving the peninsula, according to the Pacific Air Force. 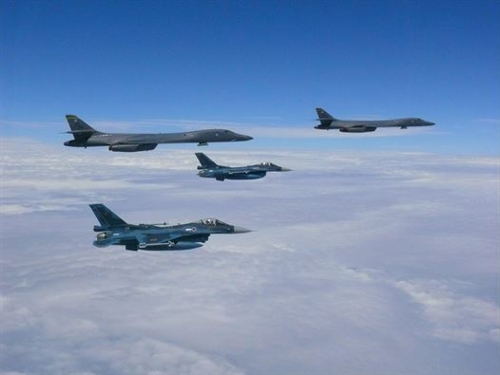 It marked the first mission for the crews and aircraft recently deployed from Ellsworth Air Force Base, South Dakota, in support of U.S. Pacific Command’s continuous bomber presence missions in the region.

“While at home station my crews are constantly refining their tactics and techniques so that we can better integrate with our counterparts from other nations,” said the squadron's commander Lt. Col. Daniel Diehl. “Our air forces stand combat-ready to deliver airpower when called upon.”

The Pacific Air Force also said the drills with South Korea and Japan demonstrate solidarity among the three parties to "defend against provocative and destabilizing actions in the Pacific theater."

South Korean defense officials said the B-1B's latest flight in the nation's aerospace was part of a regular combined exercise.

Guam is strategically important for the allies as it will serve as a key station to supply additional service members and high-profile defense assets in the event of an emergency on the peninsula.

The North is apparently unnerved by the frequent appearance of Guam-based U.S. bombers near its territory.

The Strategic Force of the Korean People's Army said in a statement that it's considering the use of intermediate-range ballistic missile Hwasong-12 for an "enveloping fire" at the areas in the vicinity of Guam.

The U.S. dispatched two B-1Bs late last month in response to the North's test-firing of another intercontinental ballistic missile. 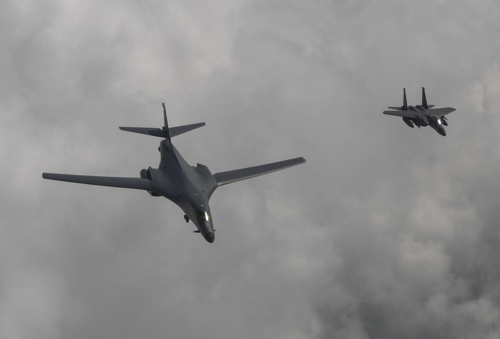