Australia is ready to call for stronger international sanctions on North Korea as the United Nations Security Council is discussing a new resolution in response to its recent nuclear test, its defense minister said Thursday.

"We support the sanctions regime the United Nations Security Council has adopted and Australia has in fact indicated that we are prepared to call for stronger sanctions in the UNSC process," Defense Minister Marise Payne told the press on the sidelines of the Seoul Defense Dialogue, an annual security forum hosted by the South Korean Ministry of National Defense.

"I think it's never late for dialogue. I believe both diplomatic and sanctions approaches are important to travel a parallel path," she said when asked about the prospect of opening dialogue with North Korea on easing tensions.

"(But) I think we have to allow the sanctions to run their course as some of them are starting in relatively recent days and weeks," Payne noted.

"These are very important tools to deliver key messages to the regime in North Korea that their actions are provocative, destabilizing and illegal," the defense chief said. "We are strongly encouraging counterparts internationally and regionally to take up the regime of (UNSC) sanctions ... to apply those in their own context and where it's appropriate, do as Australia has done and pursue an autonomous sanctions approach as well."

For the moment, her country is "very very clearly focused" on ensuring its autonomous and UNSC resolutions are pursued to the fullest opportunity rather than seeking military options, Payne said.

She said Australia is also looking at options to defend against North Korean nuclear and missile threats. "We are constantly reviewing our options in that regard," she said on the deployment of the U.S. defense missile system, Terminal High Altitude Area Defense, in South Korea.

"These are very difficult times, challenging times ... We will see greater defense cooperation," the minister said, referring to the areas of defense interoperability in particular.

Seoul's defense ministry said later Minister Song Young-moo held talks with Payne in which they agreed to toughen pressure on the North in condemnation of its sixth nuclear test despite the international community's repeated warnings.

"They shared the view that the North's latest nuke provocation poses a direct threat to not only the South and Asia-Pacific regions but also to the entire world. They agreed to push for a stronger U.N. Security Council sanctions resolution against Pyongyang," the ministry said in a statement.

In her keynote speech at the forum earlier in the day, she also highlighted the importance of China's role in international efforts to rein in North Korea's military adventurism.

"China's role will be vital in this regard. China must do more. It has economic leverage and influence over North Korea that other countries simply do not have."

"Australia is actively engaged with the United Nations Command and is committed to increasing cooperation and coordination among like-minded countries to de-escalate tensions on the peninsula," she added. 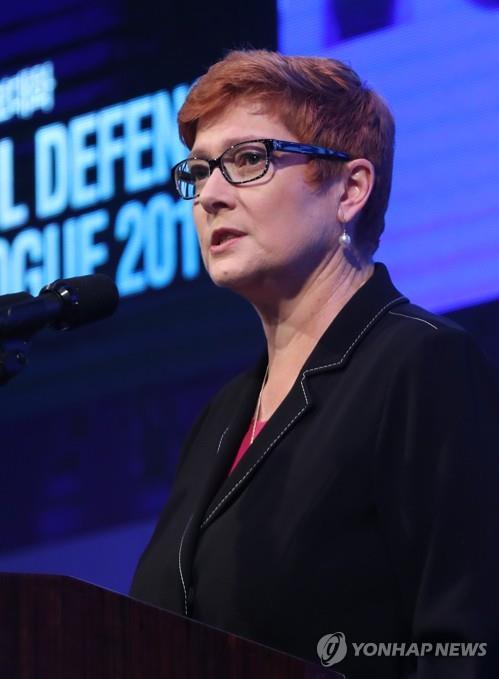