A South Korean baseball club on Wednesday admitted to paying an umpire only a day before winning a league title four years ago.

The Samsung Lions in the Korea Baseball Organization (KBO) said a senior club employee wired 4 million won (US$3,560) to the then umpire, surnamed Choi, in October 2013, after Choi had contacted the employee for some quick cash. The employee has since left the Lions, and Choi retired in 2014.

Financial transactions of any kind between umpires and club employees are strictly prohibited.

The Lions apologized for the incident and said they weren't aware of the employee's misdeed last year, when the KBO conducted its own investigation into the matter following media reports alleging Choi's illicit transactions with KBO teams.

Earlier Wednesday, prosecutors said they had obtained circumstantial evidence of the Lions' connection with Choi. The Lions said they only found out about the money changing hands after the ex-employee was questioned by prosecutors. The former Samsung official told prosecutors that he'd known Choi for a while and he lent him 4 million won as a friend. 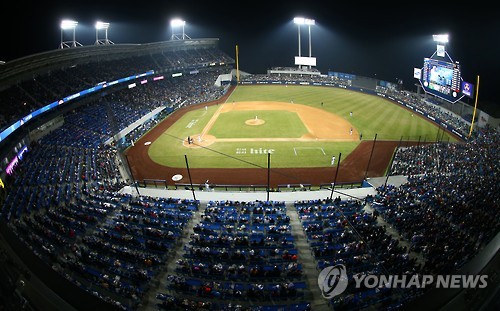 This file photo taken on April 1, 2016, shows Daegu Samsung Lions Park in Daegu, where the home team Samsung Lions hosted the Doosan Bears in the first game of the 2016 Korea Baseball Organization season.

The Lions are fourth among 10 KBO clubs to be embroiled in the snowballing scandal surrounding Choi, who allegedly called or texted officials from multiple clubs for cash.

In October 2013, the Lions and the Bears collided in the Korean Series, with the Lions prevailing in seven games to claim their third consecutive KBO championship.

Prosecutors on Wednesday requested an arrest warrant for Choi on charges of fraud and habitual gambling. According to the prosecutors, Choi borrowed some 30 million won from baseball officials and his friends without paying them back.