K-pop band BTS said Monday it hopes to enter the highly coveted Billboard Hot 100 chart in the United States with its latest record "Love Yourself: Her."

"Whenever we're asked about our goals, we say that we want to enter the Hot 100. But a lot of albums have to be sold and our music has to be streamed a lot. And there's also the radio play factor so it isn't easy," member Suga said during a press conference held at the Lotte Hotel in central Seoul.

Suga added: "Thankfully, U.S. radio stations are showing interest in us, and we're often being selected to be played. We're also selling quite a bit, and many people have their hopes and interests up. This time (we) want to enter the Billboard Hot 100."

The band, one of today's biggest K-pop acts, released "Love Yourself: Her" at 6 p.m. The album is the first in the band's new "Love Yourself" series, which will be rolled out serially into 2018.

"I never imagined working together with The Chainsmokers before our debut. Before our debut, my goal was to perform at the Olympic Stadium, but we're receiving offers that would have been impossible to even imagine," Rap Monster said. The stadium in southern Seoul is often used for large-scale K-pop concerts.

"We also want to see how far we can go, and if we make it into the Hot 100, we'd like to go as far as possible to leave many milestones in (music) history," the rapper-singer added.

In May, BTS won the Top Social Artist award at the 2017 Billboard Music Awards, beating Justin Bieber, Selena Gomez, Ariana Grande and Shawn Mendes to become the second South Korean artist to win a Billboard award after Psy in 2013. The team has yet to make an entry on the benchmark Billboard Hot 100 chart.

Preorders for "Love Yourself: Her" reached 1.21 million copies as of Monday, nearly doubling from the some 700,000 figure for the band's most recent album "You Never Walk Alone" released in February. The actual figure is expected to be higher when factoring in overseas orders. Preorders for the record reached No. 1 on Amazon's "CDs & Vinyl" category in late August.

The members said they were shocked after learning news of the record-high preorder figures.

"This time around, if we set our bar high, we thought maybe we could reach 800,000 copies. We were startled after learning the news," said Suga. "I think it's the level of trust and love from our fans," he added.

The new album holds 11 new tracks. The lead song "DNA" is a powerful four-on-the-floor EDM pop number that flows along a central whistle-like guiding motif. The track is accompanied by a colorful music video that mostly focuses on the seven members' choreography.

Other songs include the urban number "Intro: Serendipity," the synth-funk song "Pied Piper" and "Best of Me," a collaboration track with American EDM duo The Chainsmokers.

The album also has a hard-edged hip-hop track called "Mic Drop," which was inspired by former U.S. President Barack Obama's famous "mic drop" shown at the 2016 White House Correspondents' Dinner. "It's a song in which listeners can feel BTS' tremendous swag," J-Hope explained.

In "Love Yourself: Her," Rap Monster said the band wanted to underscore the importance of self love and convey the message of how people cannot care for others before learning to appreciate and love their inner selves.

"We are living in an age where people can learn immediately how others live through social media. But time spent reflecting on ourselves is decreasing. We thought that learning to love ourselves can be the answer to many of things in life," Rap Monster explained. 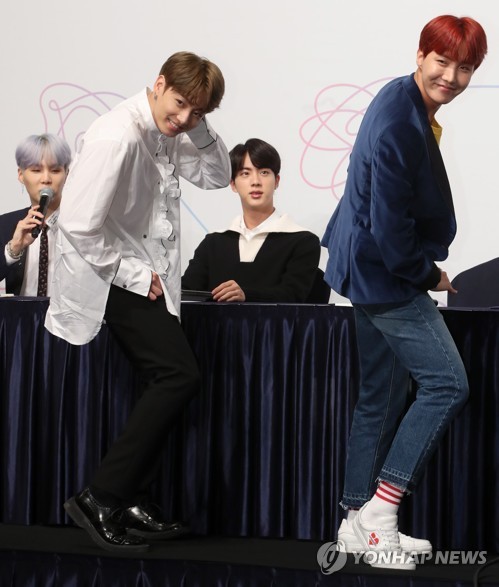 BTS also expressed gratitude towards senior K-pop artists for paving the way for their global outreach. Members also said they were lucky to be musically active in the age of social media.

"We're living in an age where if we say something, it gets reported and forwarded throughout the world in seconds and minutes," Rap Monster said.

The band leader, however, also saw the phenomenon as a double-edged sword: "But that's why it's also difficult to not be swayed. It's difficult to maintain our distinct color. We're lucky, but we also have to stick to our vision."