Chinese tiremaker Qingdao Doublestar Co. appears to be in the final stage to take over its South Korean rival -- Kumho Tire Co., informed sources said Wednesday, as it has submitted documents for the government's approval in a 955 billion won (US$857 million) deal.

In March, creditors of Kumho Tire, led by state-run Korea Development Bank (KDB), signed the deal with Doublestar to sell their entire 42.01 percent stake in the country's No. 2 tiremaker by sales.

On Wednesday, Xingwei Korea, the South Korean unit of the Chinese tiremaker, called on the Ministry of Trade, Industry and Energy to review its planned purchase of the Korean tiremaker and approve the deal, Kim Jin, in charge of the matter at the ministry, said over the phone.

"It will take three to four weeks for the Defense Acquisition Program Administration (DAPA) to review the deal first. After DAPA completes the review, we will consult with DAPA to decide on whether to approve the deal or not," the official said.

The ministry will also review the deal to see if there is any possible impact on the local tire industry, he said.

Kumho Tire is regarded as a defense industry-related company since it supplies tires for trucks and fighter jets in the country's military. But it earns only 0.2 percent, or about 7.5 billion won, of its overall sales, by supplying tires to the military, according to the company. 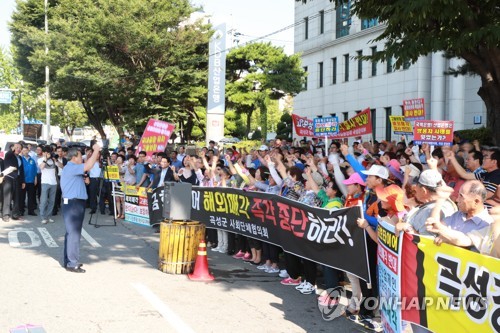 In this photo taken on Aug. 3, 2017, some 300 politicians and local activists in Gwangju, home to Kumho Tire's manufacturing plants, hold a rally against the planned purchase of the tiremaker by Qingdao Doublestar Co. (Yonhap)

The Kumho Tire creditors are in the final process to wrap up the deal, which includes the rights to the brand name of Kumho Tire and the rollover of the tiremaker's maturing debts.

"If the deal is approved by the government, we plan to roll over the tiremaker's maturing debts," a KDB official in charge of the stake sale said by phone.

As of Wednesday, Kumho Tire owes a total of 3.4 trillion won to domestic and overseas investors. Local creditor banks which have a stake in the tiremaker have extended loans valued at 2.3 trillion won. The tiremaker faces debts of 1.4 trillion won due by the end of September, he said.

The company's 2,900-member union has expressed concerns that the acquisition by the Chinese firm could result in the transfer of some production volume to China from South Korea and lead to massive layoffs of local workers.

The deal, if approved, will make Doublestar China's biggest tiremaker.

As of July, the company has a global capacity of 55 million units in eight plants -- three in South Korea and five in the United States, China and Vietnam.