Samsung is losing its lead in India, which is rapidly becoming the world's largest smartphone market, dropping to third place in brand preference behind its Chinese rivals.

In China, the world's biggest phone market, consumer preference for Samsung products has been on the wane since 2013 and its market share has fallen to fifth place. At present, India is still the world's third-largest market after China and North America, but it harbors the largest growth potential with 44 percent of the population under 24 and a smartphone penetration rate of only 25 percent.

In the online poll of 1,068 Indian consumers in the second quarter this year, 26 percent said they want to buy a Xiaomi phone, 17 percent a phone from China's OnePlus, and only 14 percent from Samsung. Samsung's ranking fell a notch even though Apple was excluded from the survey.

OnePlus is a brand belonging to China's BBK Electronics and affiliated with Vivo and OPPO, with which it shares manufacturing and parts technologies. SA said OnePlus has risen in popularity in India recently with its premium OnePlus 5 and 6.

One industry watcher said, "The survey must be a bitter pill to swallow" for Samsung, which has just opened a new smartphone plant in Noida outside New Delhi to regain its lead. 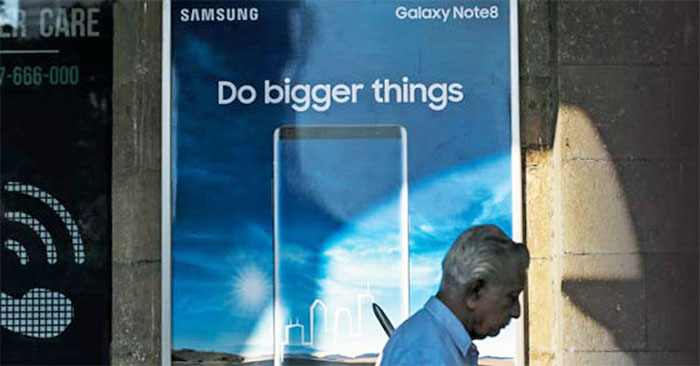 Preference surveys usually predict purchasing patterns quite accurately. A similar preference survey in the first quarter of 2017 showed Xiaomi in the lead followed jointly by Samsung and Apple. But in terms of market share, Samsung was ahead of Xiaomi, which eventually overtook the Korean giant by two percentage points in the fourth quarter of last year. The gap widened by five percentage points in the first quarter of this year.

The trend is reminiscent of what has happened to Samsung in China. Brand preference surveys of Chinese consumers by Morgan Stanley showed Samsung's share of fans falling from 37 percent in 2013 to 15 percent in 2015. Over the same period its market share fell from first to fifth. Now it ranks a sorry eighth with a market share under two percent.

Samsung faces stiff competition from China in terms of both cheap and premium smartphones. Its main rival in the low to mid-priced segment is Xiaomi, which has six plants in India already and controls 50 percent of India's online sales. Samsung also ranked third after OnePlus and Apple in India's premium market as of the third quarter of 2017.

Lee Byung-tae at the Korea Advanced Institute of Science and Technology said, "Chinese manufacturers learned how to beat Samsung in India from their success at home. The only way Samsung can win back the hearts of consumers is to build smartphones that boast superior quality and lower prices."