Confusion Flares Over Talks on Return of U.S. Troop Remains

Even after the U.S. announcement of plans for a meeting with North Korea this weekend on the return of soldiers' remains, confusion persists over how to characterize it.

"Mid day July 12th (the North Koreans) contacted us and offered to meet on July 15th. We will be ready," the State Department's spokesperson Heather Nauert said.

The United States is apparently seeking a "government-to-government" approach to receive the remains of service members killed in the 1950-53 Korean War, in line with the Singapore summit deal last month. Apparently, the U.S. does not want to frame it as military negotiations with the North. It has only referred to them as consultations on the agreed-upon repatriation of the remains.

But it's still unclear who's taking the lead on the U.S. side -- diplomats or military officials? Nauert stopped short of revealing the list of American delegates to the talks.

On Thursday, a team of U.S. officials, reportedly including U.S. Forces Korea (USFK) service members, waited for the North's officials at Panmunjom, straddling the inter-Korean border, but they did not show up.

Wrapping up his overnight stay in Pyongyang last week, Secretary of State Mike Pompeo said the two sides agreed to meet each other at the truce village around July 12. 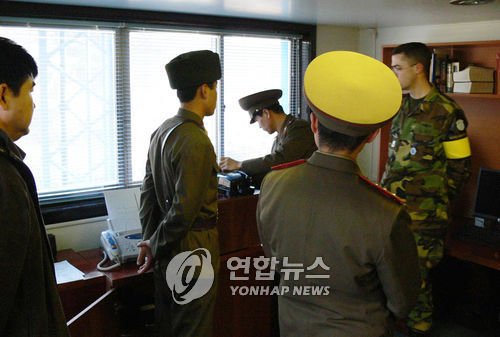 What's noteworthy is a news report that the North's military used a direct phone line with the United Nations Command (UNC) to reschedule the negotiations.

If confirmed, it would mark the first operation of the channel in years.

The North has refused to answer calls by UNC officials, forcing them to read out statements a step away from the Military Demarcation Line when they had messages to deliver.

"The phone line was not used. Technically, it has not been cut," a UNC official said. "It's different from inter-Korean hotlines at Panmunjom, through which South and North Korean officials are supposed to communicate regularly."

He added there's no specific information to share on reports that the North has requested "general-grade" military talks on the issue of returning the remains.

The North's intentions remain unconfirmed. It's uncertain as well whether the direct communication line is back in full service.

Pyongyang's focus is seen as placed on formally ending the Korean War, establishing a peace regime for security assurances and breaking diplomatic isolation.

As a command structure of multinational forces, which fought alongside the South in the war, ironically, the UNC is symbolic of the armistice system.

The U.S. has set denuclearization as a precondition and regards the repatriation of the remains as an initial test of the North's will for the implementation of the summit agreement that calls for the complete denuclearization of Korea and improved ties between Pyongyang and Washington.

Meanwhile, the Pentagon chief Jim Mattis said earlier that if the North sends back the remains, a ceremony will be held under the UNC flag.

The U.S. military has the tradition of formally referring to such remains as those of UNC troops before they arrive in the U.S., whereupon they are officially identified as those of Americans.

It's in recognition of the 20 other countries that dispatched combat troops or medical teams under the U.N. flag to help the South. The USFK commander doubles as its leader, leading to a public belief that the UNC is equivalent to U.S. forces.

The UNC oversees the armistice, while the USFK, along with the South Korea-U.S. Combined Forces Command (CFC), provides military force in case of contingencies, as well as serving as a deterrent against Pyongyang's possible aggression.