Only 3 percent of executives at the top 500 companies in South Korea were women last year, showing the glass ceiling for the female workforce remains high, according to a survey by the gender equality ministry Thursday.

Results of the recent survey of the 500 biggest companies by revenue found that they have a combined 454 woman executives, accounting for only 3 percent of the total. The survey was commissioned by the Ministry of Gender Equality and Family and conducted by the Korean Women's Development Institute.

A total of 328 firms out of the 500 surveyed, or 65.5 percent, did not even have a single female executive, the results also showed.

Still, the overall rate of female executives at the financial and insurance sector remained 3.7 percent, up from 2.7 percent from 2016. The corresponding rates for the manufacturing and the wholesale-retail sectors was 2.7 percent and 1 percent in 2017, respectively.

"Reflecting the economic size of South Korea, female representation remains at an embarrassing level," Gender Equality Minister Jin Sun-mee said. "Based on the results of the latest survey, (the ministry) plans to seek a wide range of measures to increase the population of female executives." 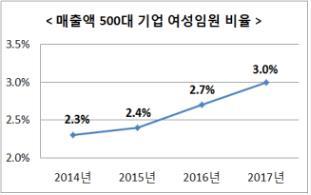