The government will formally dismantle a foundation set up under a controversial agreement with Japan in 2015 to compensate victims of wartime sexual slavery.

"The announcement will be made some time later this month, and it will take six to 12 months until legal process of disbanding it is complete," a government official said Saturday.

The foundation was established in July 2016 with 1 billion yen from the Japanese government under a murky agreement struck by the Park Geun-hye administration.

Since Moon Jae-in became Korea's president last year, the foundation has effectively been on ice, and most of its board resigned at the end of last year. The government plans to use its own money to compensate the victims instead while tricky negotiations with Japan over the unfeasible agreement continue.

One promise the Park administration made but could not keep was to remove statues honoring the victims from the vicinity of Japanese diplomatic missions, but they sit legally on municipal land out of control of the central government. About W580 million yen remain idle in the fund.

Japan has put up fierce resistance against changing any part of the deal, which allows it to compensate the victims without admitting guilt for the atrocity. 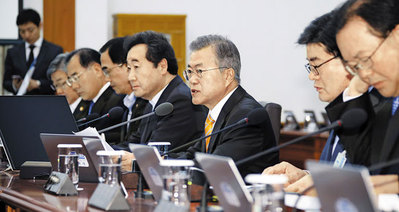