A pair of Japanese footballing brothers will play for the same South Korean team for the first time in league history.

E-Land said this is the first time in the K League history that two Japanese brothers are on the same club.

Tomoki, 22, made his pro debut with Japanese club Vissel Kobe in 2013 and joined South Korean side Incheon United on loan in 2015. He moved to Gwangju FC last year.

"I've never expected that I would be on the same team as my brother," Tomoki said. "I still can't believe it."

Atsuki, 24, started his career with J2 League's Kyoto Sanga in 2015 and he joined E-Land this season. The midfielder has so far posted two goals and four assists in 19 matches.

"My brother has good techniques and passing skills," Atsuki said. "I hope my brother overcomes competition within the team and plays with me on the pitch."

E-Land are currently ninth in the 10-team league with three wins, seven draws and 11 losses. 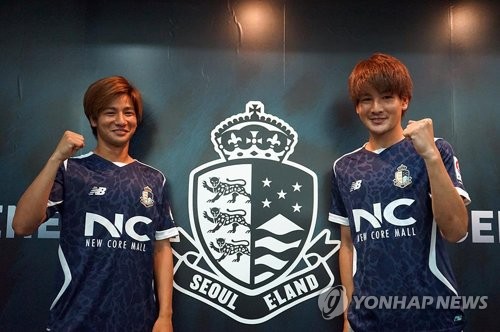