Unionized workers at Kia Motors Corp. voted to go on strike after wage talks with the management recently broke up, the carmaker's union said Tuesday.

The vote comes as the carmaker struggles with slowing sales in major markets such as China and the United States due to diplomatic rows and lack of new models, respectively.

In the vote held from Monday to Tuesday, 24,871, or 72.1 percent of Kia's 28,240-strong union workers, agreed to a walkout in case of no agreement being reached with management over wages.

The labor union demands the company raise workers' monthly basic wages by 154,883 won (US$136) and offer a bonus of 30 percent of the company's full-year operating profit earned in 2016.

But the company sees the demands as "excessive," citing its poor performance in global markets last year and in the first half of this year.

In the January-June period, Kia sold a combined 1.32 million autos, down 9.4 percent from 1.46 million in the year-ago period. 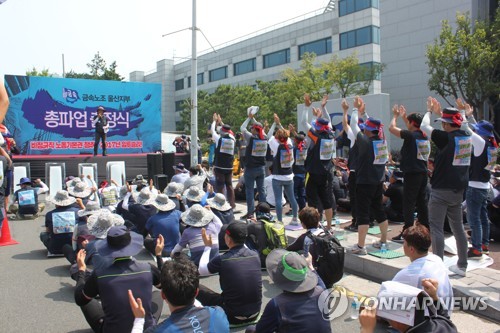 Meanwhile, Hyundai Motor's 50,274-strong union voted on Friday to go on strike in case of the breakup of ongoing wage talks.

This week, the union asked the National Labor Relations Commission to intervene and help narrow the gap running deep between labor and management over wages and welfare benefits. But the company didn't accept the demands, a spokesman for the workers said over the phone.

"So we (union leaders) are in discussions to decide when to stage a walkout and other action plans to make our demands heard," he said.

At the same time, the union hopes to reach an agreement with management in this year's wage talks before the company's one-week summer holidays begin on July 31.

Its workers want the company to raise their basic monthly wages by 154,883 won and offer a bonus of 30 percent of the company's net profit in 2016.