Canoe paddlers for the joint Korean team competing at this year's Asian Games will hold joint practices at a venue in the South, Seoul officials said Thursday.

"North Korean paddlers may come down here sometime next week, and we'll begin training together as soon as they arrive," a KCF official said.

Dragon boat racing is one of three sports in which the Koreas will field unified teams at the Aug. 18-Sept. 2 Asian Games in Jakarta and Palembang, Indonesia. Women's 5-on-5 basketball and rowing are the others. 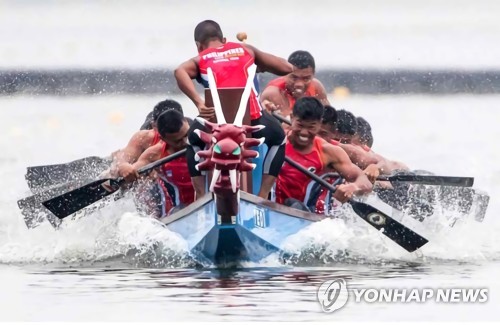 The women's combined basketball team will train at the Jincheon National Training Center in Jincheon, about 90 kilometers south of the capital city. There will be three North Korean players joining nine South Koreans on the floor. It's not yet clear when the three North Koreans -- center Ro Suk-yong, guard Jang Mi-gyong and guard Kim Hye-yon -- will cross the border.

The Koreas have never assembled joint teams at Asian Games, summer or winter, prior to this year. They had a unified women's hockey team at the PyeongChang Winter Olympics in February this year.