The government on Thursday referred the chief of major broadcaster MBC to the prosecution, recommending filing an indictment for labor malpractices.

The Ministry of Labor and Employment's western Seoul district office also requested further prosecution investigation of five other former and current senior executives of the public TV network on the same charges.

The labor office has been looking into allegations that Kim Jang-kyom, president and CEO of MBC, meddled in the news production in favor of the former conservative Park Geun-hye government.

Kim has been also accused of abusing his authority in personnel matters by disadvantaging some employees, mainly journalists and producers, who refused to follow his directions.

The five others under probe include Kim's predecessors Kim Jae-chul and Ahn Kwang-han and three sitting executives.

The ministry began the inspection in June acting on a complaint lodged by the MBC labor union.

The union claimed that they violated labor laws by unfairly exerting influence over personnel affairs based on political bias. Kim and the other five officials have denied any wrongdoing.

Hundreds of unionized employees at MBC and another major public broadcaster KBS have been on strike since early this month, demanding their chiefs resign and the independence of news production be guaranteed. 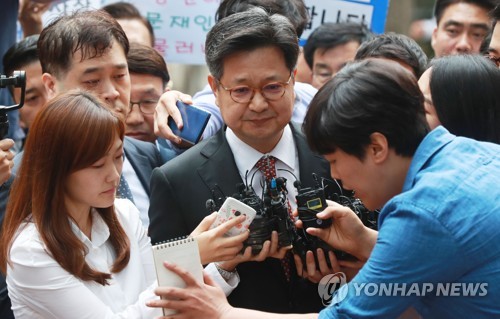