Hotel Lotte Co., a hotel and duty-free unit of South Korean retail giant Lotte, saw its operating profit nosedive in the first six months of this year, data showed Wednesday, amid an ongoing diplomatic row between Seoul and Beijing over the deployment of a U.S. missile defense system here.

The weak bottom line was widely expected as the retailer has been suffering from China's apparent retaliation over the deployment of the Terminal High Altitude Area Defense (THAAD) battery here.

The number of Chinese tourists in South Korea more than halved in June, marking a decline for four straight months after Beijing banned its travel agencies from selling package tours to South Korea since mid-March.

Hotel Shilla Co.'s duty-free department reported 1.71 trillion won in revenue in the first half of this year, up 3 percent on-year, but its operating profit declined from 43.1 billion won to 24.9 billion won over the cited period.

Industry watchers forecast local retailers to suffer a protracted slump for the time being as the THAAD row is likely to last.

"With no signs of a solution to the THAAD row, Lotte and other China-reliant firms here will find it hard to find a breakthrough," an industry source said. 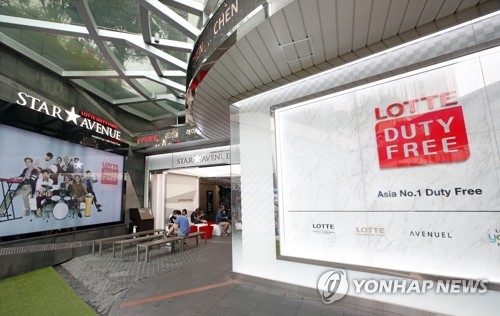