South Korean President Moon Jae-in and Russian President Vladimir Putin called for efforts to stop North Korea from making any further provocations Wednesday, calling it the most urgent challenge facing their countries and the rest of the world.

"President Putin and I agreed that resolving the North Korean nuclear issue at the earliest date possible is the most important task," the South Korean leader said of his bilateral talks with the Russian president in the Russian far eastern city of Vladivostok. 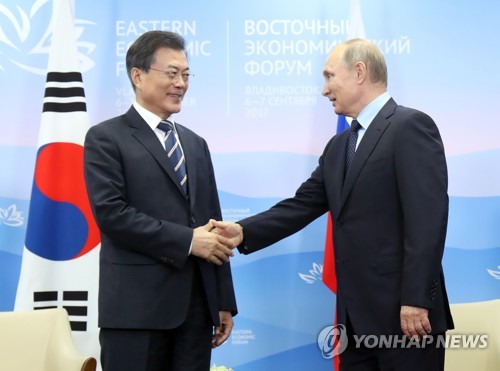 Speaking at a joint press conference following their summit, Putin said his country cannot accept a nuclear-armed North Korea, according to the Korean translation of his remarks.

The Russian president, however, insisted only sanctions and pressure could not resolve the issue, stressing the need to resume dialogue with the reclusive North.

Moon earlier underscored the need to resolve the North Korean nuclear issue peacefully through negotiations, but said now was not the time for dialogue.

In his earlier telephone conversation with Putin, held one day after the North's latest nuclear provocation, the South Korean leader stressed the need to put in place additional and stronger sanctions against the North that will leave the country with no other choice but to come to the dialogue table.

Such measures should include completely cutting off the oil supply to the impoverished North, Moon has said.

He renewed his request for Russia's support in pushing for a new U.N. Security Council (UNSC) resolution aimed at cutting off oil shipments to the energy-starved North, noting the communist state had once been forced to multilateral negotiations on ending its nuclear development program after China, its largest ally, cut off its oil supplies.

"President Moon said they must intensify the severity of UNSC sanctions at least to place North Korea on the track to dialogue," Moon's top press secretary Yoon Young-chan told a press briefing.

"The president asked Russia to help, noting it was imperative to at least cut off oil supplies to North Korea this time."

"However, I am concerned cutting off oil supplies to North Korea may cause damage to people in hospitals or other ordinary citizens there," the Russian president was quoted as saying.

He also noted Russia only shipped about 40,000 tons of oil to the North a year, according to Yoon.

"The global political situation has become very serious due to North Korea's repeated provocations," the South Korean leader told the Russian president at the start of their meeting.

The North's latest and sixth nuclear test is believed to have been its most powerful nuclear test so far. The communist state has also staged nine missile tests since the new South Korean leader took office in May. Since the beginning of the year, the communist regime has conducted 14 missile launches.

Despite their apparent differences, mainly over how to bring North Korea back to the dialogue table, the two were seen to be on the same page when it came to economic issues.

Moon and Putin agreed to push for a free trade agreement between South Korea and the Eurasian Economic Union, which consists of Russia, Kazakhstan, Belarus, Kyrgyzstan and Armenia, according to Yoon.

Moon arrived here earlier in the day for a two-day visit. He was set to hold a bilateral summit with his Mongolian counterpart Khaltmaagiin Battulga later Wednesday.

On Thursday, the South Korean president will hold bilateral talks with Japanese Prime Minister Shinzo Abe before attending the third Eastern Economic Forum, an economic summit aimed at promoting regional cooperation in the development of the Russian Far East.