South Korean President Moon Jae-in on Friday called for sincere efforts on all sides to move the North Korean denuclearization process forward, insisting that its leader Kim Jong-un is determined to turn his country into a normal state.

"I have met Chairman Kim Jong-un twice so far. Chairman Kim had a great desire to break away from ideological confrontations and develop North Korea into a normal country," Moon said in a special lecture hosted by the Institute of South East Asian Studies in Singapore.

"If Chairman Kim Jong-un keeps his promise to denuclearize, he may be able to lead his country to prosperity," the South Korean president added. Moon and Kim held two inter-Korean summits, on April 27 and May 26.

Friday's lecture was the 42nd of its kind to be given by a visiting foreign leader, according to Moon's presidential office Cheong Wa Dae. Moon is only the second South Korean head of state after the late former President Kim Dae-jung to speak in the so-called Singapore Lecture. 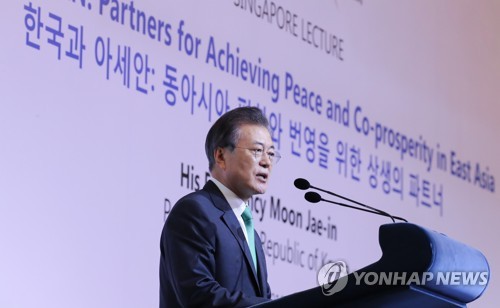 Moon's remarks came amid suspicions that North Korea and the United States may have hit a stumbling block over how the denuclearization should proceed.

Following his two-day visit to Pyongyang last week, U.S. Secretary of State Mike Pompeo said he had very productive discussions with his North Korean counterparts on how to rid the North of its nuclear weapons.

North Korea, however, has accused the U.S. of making "gangster-like" demands for complete denuclearization without any making any concessions.

Moon said the denuclearization process will not be easy but that the countries will reach their goal only if they sincerely implement what has been agreed upon by their leaders.

"If North Korea comes up with a more detailed plan for its denuclearization while South Korea and the U.S. swiftly take corresponding measures, the speed (of denuclearization) will further increase," he told the lecture, attended by some 400 officials and top opinion leaders of Singapore.

When later asked if the latest denuclearization agreement between the U.S. and North Korea would actually be implemented, the South Korean president insisted the countries will have no choice but to implement the agreement reached by their leaders.

"In the past, there were times when working-level talks between the North and the U.S. about the North Korean nuclear issue failed or when such efforts were disrupted even after an agreement in the process of implementing the agreement," Moon said.

"However, what is completely different this time is that the leaders of the North and the U.S. met directly and reached an agreement," he added.

The president said the countries will continue to face many bumps and bruises as their working-level officials meet to actually map out a detailed denuclearization plan, but that they will eventually reach an agreement.

"I believe the countries will honor the agreement reached by their leaders even if they face many difficulties in the process of working-level negotiations because their leaders personally made a promise in front of the entire international community," President Moon said.

The South Korean president insisted the countries may also need to start considering steps to prevent North Korea from going back after giving up its nuclear ambition.

Such efforts will require bringing North Korea back to the international community as a member and economic partner, Moon said.

"It is important to embrace North Korea in various frameworks of cooperation and exchange between South Korea and the Association of Southeast Asian Nations (ASEAN) that are already established," he said.

The South Korean president stressed the importance of support from ASEAN, noting all its 10 member countries have diplomatic ties with North Korea.

"I hope ASEAN will include North Korea in its various meetings and strengthen the countries' bilateral exchange and cooperation with North Korea if North Korea faithfully implements its denuclearization measures. We must create a chance for North Korea to fulfill its role as a responsible member of the international community," he said.

In return, North Korea may create new opportunities not only for South Korea and ASEAN but the entire Asian region.

"The establishment of peace on the Korean Peninsula will not stop there, but create a new growth engine for all countries in the region, including ASEAN, by creating a link between the economies of ASEAN, South Korea, North Korea and Eurasia," Moon added.

"When the Korean Peninsula builds peace, Asia, along with Singapore and ASEAN, will become the most prosperous region in the world. It will be a hope to guide the future of humanity."