President Moon Jae-in's approval rating slipped 3.2 percentage points to a record-low 48.8 percent this week, according to research firm Real Meter on Thursday. This is the first time that Moon's approval rating has fallen below 50 percent.

The rating has been falling for the past nine weeks. In early May, just after the April 27 summit with North Korean leader Kim Jong-un, it stood at a starry-eyed 78.3 percent, while only 15.5 percent disapproved of his leadership.

But in the latest poll, 45.8 percent disapproved of Moon's leadership. In his hometown of Busan, neighboring Ulsan and surrounding South Gyeongsang Province, Moon's approval rating plunged to a paltry 37 percent.

He is also rapidly losing his support base among 20-somethings, the self-employed or small-business owners, mainly due to his failed economic policies and the recent stalemate over North Korean denuclearization.

The latest poll was conducted on 1,508 adults across the country from Monday to Wednesday. 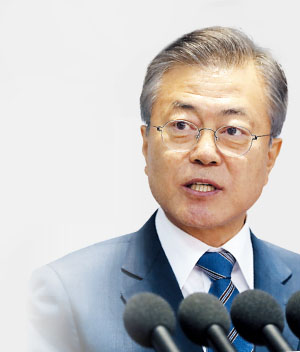