North Korea has rejected a South Korean civic group's proposal for a joint event to celebrate the 72nd anniversary of Korea's liberation from Japan's colonial rule in August, the group said Wednesday.

The civic group said that its North Korean counterpart has rejected its offer to hold the joint event on Aug. 15, Korea's Liberation Day from Japan's 1910-45 colonial rule.

The official said that the group received a fax message on Friday when the North launched its second ICBM, claiming that the whole U.S. mainland is within its strike range.

He said that the message said that it is not proper to hold a joint celebration ahead of an annual military drill between Seoul and Washington slated for late August.

The North has claimed that the joint military exercise is a rehearsal for a northern invasion, despite reassurance by the South and the U.S. that it is defensive in nature.

"North Korea said that the current security situation has led the country to focus on its fight with the U.S., not inter-Korean exchanges," the official said.

Moon took office in May with vows to seek a dual-track approach of North Korea's denuclearization and dialogue with Pyongyang.

The government announced the resumption of civilian inter-Korean exchanges and recently proposed military and family reunions talks, but the wayward country has rejected all rapprochement gestures. 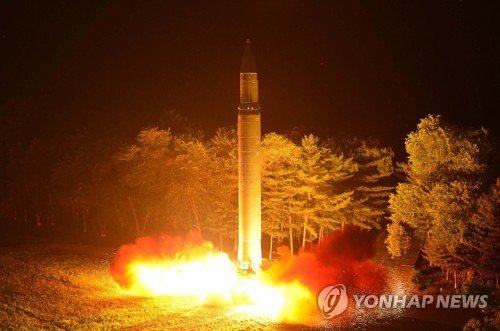