A China-based tourist agency that arranges tour programs to North Korea said Monday that the North has informed it of the cancellation of a beer festival slated for late July to the end of next month.

Koryo Tours said that it was informed on Sunday that the 2nd Taedonggang Beer Festival has been canceled for an unknown reason. The fest is supposed to be held from July 26 to late August at an excursion ship and the wharf along the Taedong River running through Pyongyang.

"The reason for the cancellation is unclear and we don't expect full information to be forthcoming but it is possibly down to the ongoing drought in the country that has caused a great deal of trouble," the agency said on its English-language blog.

It said that the festival for tourists could have been "excellent mingling and interaction opportunities with hundreds of local people who attend every evening."

The Korean Central News Agency promoted the fest last week, saying that the country will present a newly produced wheat beer at the festival.

North Korea has been stepping up a campaign to minimize the drought damage in the country's granary areas including the country's western Hwanghae Province.

North Korea's holding of events such as the beer festival and marathons is one of the main sources of hard currency amid tough international sanctions.

The United States said Friday that it will ban its citizens from traveling to North Korea amid concerns about their safety.

The move came after Otto Warmbier, a U.S. college student, died in June after returning from North Korea in a coma following a 17-month detention. 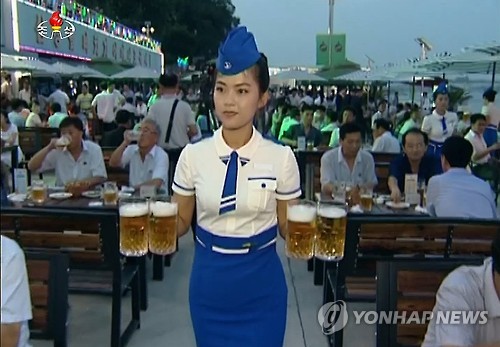