North Korea has been conducting a large-scale campaign to sort out disgruntled citizens amid growing public fatigue over toughened international sanctions against the impoverished state, Seoul's spy agency said Monday.

During a parliamentary briefing, the National Intelligence Service (NIS) pointed out that the North's international isolation has further deepened as European and Latin American states have reduced diplomatic staff as part of the sanctions.

"As citizens' fatigue has increased amid toughened anti-Pyongyang sanctions, the North has sorted out disgruntled citizens, and expelled those with criminal records or the jobless out of Pyongyang," the NIS was quoted by a lawmaker as saying during the briefing.

"After the U.N. Security Council resolution entailing strengthened sanctions, the North's diplomatic isolation has deepened," it added, referring to the resolution adopted on Aug. 5 in response to the North's long-range missile tests last month.

The agency explained that France, Bulgaria, Peru and Mexico have scaled back or expelled some of the North's diplomatic staff on their soil with Kuwait having recently joined them, according to Rep. Lee Wan-young of the main opposition Liberty Korea Party, who attended the briefing.

"Some Middle Eastern states have restricted the new import of North Korean labor, while some Southeast Asian countries have urged their nationals to refrain from traveling to the North," the NIS reported.

Commenting on the North's launches on Saturday of projectiles, the NIS said that chances are high that they were short-range ballistic missiles.

In the first provocation in a month, the North fired three projectiles into the East Sea. The presidential office Cheong Wa Dae initially presumed that they were from a new 300-mm multiple artillery rocket launch system -- a claim that triggered speculation it was trying to downplay it to help create momentum for dialogue with the North.

The NIS also said that Pyongyang has completed preparations for another nuclear test at tunnel 2 and 3 at its Punggye-ri test site.

During the briefing, the NIS noted that the North's technology to produce the reentry vehicle for its proclaimed intercontinental ballistic missile is at a "low" level.

The assessment was based on its analysis of a photo, which the North's state media released in its report on the North's leader Kim Jong-un's recent visit to the Chemical Material Institute of the Academy of Defense Sciences.

On the possibility of additional provocations, the NIS predicted that the North could launch another ballistic missile during the remainder of the ongoing South Korea-U.S. military exercise set to end Thursday or in time for its regime's foundation on Sept. 9. 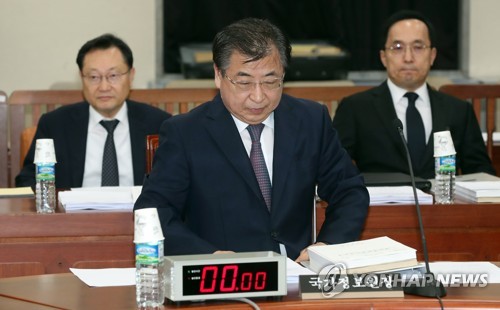