North Korea said Wednesday that it has released an imprisoned Canadian pastor for humanitarian reasons amid escalating tensions on the Korean peninsular stemming from the North's continued provocations.

The Korea Central News Agency, the communist state's official media outlet, reported that Lim Hyeon-su, a Canadian civilian, was released on sick bail in line with the decision of the Central Court of the North.

Lim, a Korean-Canadian pastor, has been held in captivity in the North since he entered the country via China on a humanitarian mission in January 2015.

In December, the North's highest court sentenced Lim to life in prison with hard labor, citing his "subversive plots" against the North's regime.

His release came one day after a special envoy of Canadian Prime Minister Justin Trudeau arrived in the North.

Daniel Jean, national security advisor to the prime minister of Canada, and his party arrived in Pyongyang, the KCNA reported on Tuesday.

The visit drew speculation that the envoy was to persuade the North to release the detained pastor.

Lim's family has been urging the Canadian government to step up efforts to release him after U.S. college student Otto Warmbier was released in a coma from North Korea in June following a 17-month detention and died days after a medical evacuation.

He has visited the country more than 100 times for humanitarian activities since 1997. 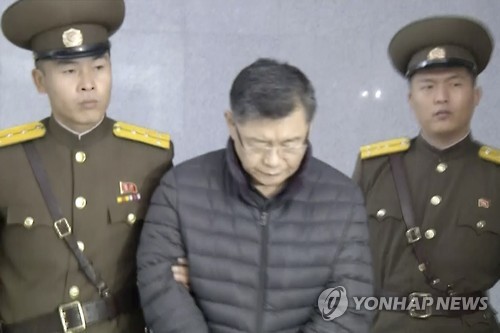