President Moon Jae-in talked with his U.S. counterpart Donald Trump for about 50 minutes on the phone on Tuesday evening to discuss Wednesday's trip to Pyongyang by five senior South Korean officials. "Improvements in inter-Korean relations and reduction of tensions on the Korean Peninsula will contribute to achieving denuclearization and building a permanent peace framework on the peninsula," Moon said according to Cheong Wa Dae spokesman Kim Eui-kyeom.

The trip comes as Trump's vague agreements with North Korean leader Kim Jong-un are unraveling and Trump canceled a trip to Pyongyang by his Secretary of State Mike Pompeo last month. Trump expressed hope that another inter-Korean summit will not only improve ties but lead to the implementation of his agreements with Kim and future talks. 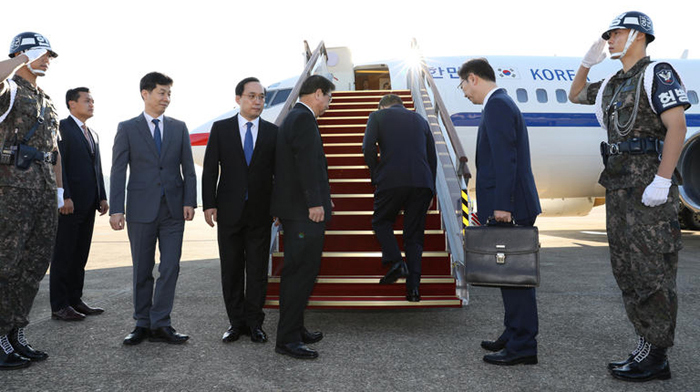 They agreed to meet at the UN General Assembly in late September, which Kim is not expected to attend despite an earlier invitation from Trump. National security adviser Chung Eui-yong flew to Pyongyang on Wednesday morning with National Intelligence Service chief Suh Hoon and three other senior officials who are expected to finalize schedule and agenda for the inter-Korean summit later this month and try to break the impasse between the U.S. and North Korea.

"We should help push for negotiations on the denuclearization of the Korean Peninsula through development in the inter-Korean relations," Chung told reporters Tuesday.

The government hopes the summit can take place between Sept. 17 and 21.