Prosecutors demanded in a regional court on Tuesday a 20-year prison term for a teenager charged with the abduction and murder of an eight-year-old girl early this year.

The Incheon District Prosecutors Office requested the maximum sentence allowable by juvenile law for the 17-year-old defendant, identified only by her last name Kim. It also asked the court to order her to wear a location-tracing device for 30 years.

In a separate trial held concurrently, the prosecutors demanded life imprisonment for an 18-year-old surnamed Park who's been indicted as a co-conspirator in the case.

Kim and Park have been detained and indicted on charges of colluding with each other to kidnap and murder a primary school student and dump the body near Kim's neighborhood in Incheon, west of Seoul, in late March.

According to the prosecution, Kim lured the girl into her place from a nearby park, telling her that she'd let her use her phone as the girl was trying to call her mom. She strangled her to death in her home and hid the body on the apartment's rooftop.

In SNS messages they sent to each other before the kidnapping, Kim reportedly told Park that she was going out "on a hunt" and Park replied by saying "Too bad (for the little girl)."

The case made headlines for the brutality of the murder and the young defendants' anti-social attitudes toward the crimes they committed.

Kim, a high school dropout, has confessed to mutilating the girl's body and delivering part of it to Park, who she met through a social networking site.

She initially claimed she acted alone, but later changed her statement and said Park orchestrated the whole scheme and she followed her orders. The prosecution later added a murder charge against Park based on fresh evidence and Kim's testimony.

Park has admitted to the abandonment of the dead body, but not to the murder. Kim has confessed to her charges and also insisted she suffers from Asperger's syndrome, a type of autism, and multiple personality disorder.

The court is due to deliver the verdict on the defendants on Sept. 22. 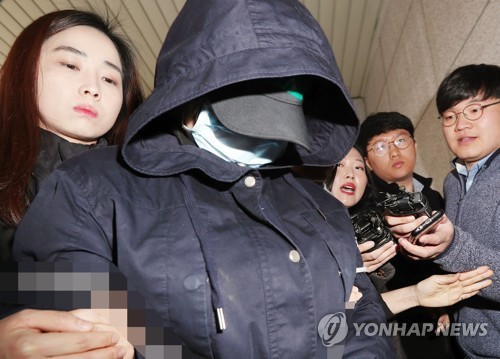