The massive walkout at Korea's two public broadcasters, which has entered its third week, has caused viewership ratings to decline amid program cancellations and advertisers to start flocking to other networks, data showed Monday.

"Infinite Challenge," a popular variety show on MBC, has aired reruns of previous episodes for the last two weeks, with ratings, surveyed by Nielsen Korea, dropping to 3.8 percent on Saturday from 9.2 percent on Sept. 2 before the strike. 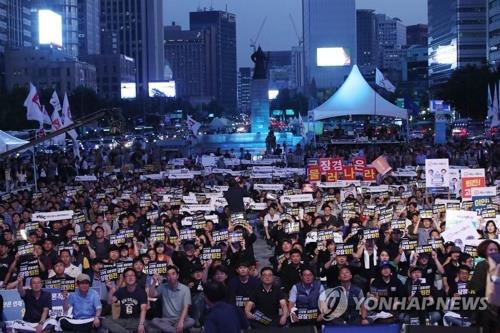 Protesters at KBS and MBC, South Korea's two major networks, gather at Gwanghwamun Plaza in Seoul on Sept. 8, 2017, to demand the management step down.

It's the same story with other programs.

The network's Sunday singing competition show "King of Mask Singer" has suffered a major setback to its ratings as well. The normal two installments, which aired on Sept. 3, recorded 6.6 percent and 10.3 percent, but the figure crashed to 5.8 percent yesterday.

On Sunday, KBS 2 TV's "Happy Sunday" also aired the replay of previous episodes, garnering a rating of 8.3 percent. It recorded 12.8 percent on Sept. 10 when it was broadcast normally.

Thousands of labor unionists at both networks have started a sit-in since Sept. 4, calling for their management to step down for allegedly meddling in news coverage and engaging in unfair labor practices.

The prolonged operational disruptions placed the rival network SBS on a relative advantage.

"Running Man," the network's popular variety show, has seen its ratings rise to 5.9 percent and 8.2 percent for its two installments on Sunday. Two weeks ago, it earned 4.8-7.7 percent. 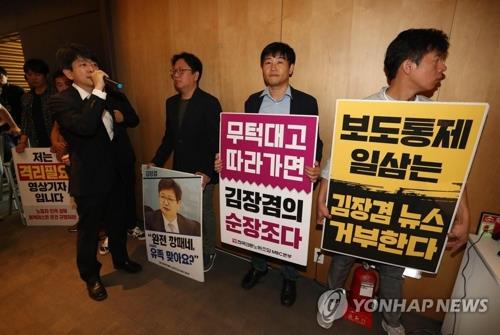 Union members at MBC protest in front of the president's office on Sept. 4, 2017.

Total National Multimedia Statistics (TNMS), a Seoul-based data company on viewership, said the dropping ratings of some of the country's most popular variety shows reflect the fact that the repeat of past episodes is clearly failing South Korean viewers and that it will be challenging for the networks to retain viewers for much longer.

To make matters worse, the unit cost of advertisement has been dropping: prime time ad cost stands at only 80 percent of that in a normal circumstance, according to the Korea Broadcast Advertising Corp. As viewership ratings continue to sag, ad losses will inevitably be aggravated.

The index measures the level of popularity and influence on consumer behavior of all entertainment TV programs aired on major territorial networks and cable channels during prime time.