Ryu Hyun-jin of the Los Angeles Dodgers tossed a gem once again at an away game on Friday against the San Francisco Giants. Ryu allowed just one run over six innings to lead the Dodgers to a 3-1 victory at AT&T Park in San Francisco.

Ryu has won his last three starts, and concluded the regular season with seven wins, three losses, and 1.97 ERA. It is the first season for Ryu to finish under 2.00 ERA. He now has 40 wins and 28 losses in his MLB career.

The Dodgers clinched a berth in the post-season for the sixth year running by beating the Giants 10-6 on Saturday.

The Dodgers and Rockies tied after the final game on Sunday, so a tie-breaker on Tuesday will determine the winner of the division. The team that loses will have to play a wildcard game. 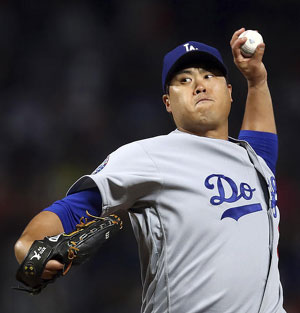