South Korea's Foreign Minister Kang Kyung-wha said Wednesday there's a possibility of relevant parties declaring an end to the Korean War when their leaders hold a U.N. meeting in autumn.

Speaking to lawmakers at the National Assembly, she said the U.N. General Assembly session, to be held in New York in September, can be a chance for the ceremony but added that no specific moves have yet been made.

If realized, it would be a "political declaration" aimed at facilitating the denuclearization of Korea, Kang said.

She cited the North's goodwill gestures: the removal of nuclear-testing facilities and the reported beginning of dismantling a long-range missile site.

"(We) are in consultations with related countries for the war-ending declaration at the earliest possible date," she said.

South Korea wants to do so by the end of this year. The North is also eager for that.

But the U.S. remains cautious about offering the major gift for the Kim Jong-un regime which has yet to present a timetable for "complete denuclearization."

Asked if China should be involved in the process of proclaiming an end to the 1950-53 conflict, the minister noted the neighboring country is an "important partner to cooperate with on Korean Peninsula issues."

On the future of the inter-Korean industrial complex in Kaesong, now closed, she said conditions have not been created yet to talk about the resumption of the project.

She said appropriate conditions, including sanctions relief, are necessary for full-fledged economic cooperation between the two Koreas.

"The govenrment's basic position is that the framework of the sanctions on North Korea by the (U.N.) Security Council and the international community should be maintained and implemented faithfully until there's assurance that denuclearization has been achieved completely," she said. 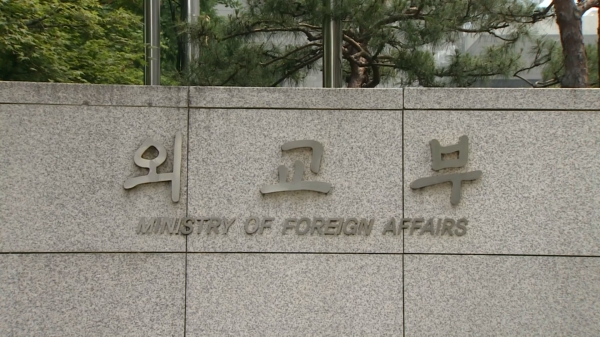 In a policy report to lawmakers earlier in the day, meanwhile, Kang's ministry said the government will also make "active" contributions to progress in Pyongyang-Washington relations on the basis of the robust alliance.

The left-leaning Moon Jae-in administration has endeavored to improve Seoul's ties with Pyongyang and Washington.

On the allies' joint military drills, some of which have been suspended amid the peace mood, the ministry said the defense authorities of the two sides will decide whether to halt additional exercises, taking the North's sincerity on denuclearization into account.