"The government plans to build the museum for the comfort women in a place easily accessible so that it can play a role as a mecca for people to remember and recall the human rights violations that the war brought," the minister said.

Comfort women is a euphemism for Asian women, mostly Koreans, who were forcibly taken to front-line military brothels to serve the Japanese army during World War II.

Chung made the remarks during a visit to the House of Sharing, a shelter for the former sex slaves, in Gwangju, east of Seoul. The visit was her first on-site activity as minister since her inauguration late last week.

The comfort women question no longer remains an issue just between South Korea and Japan, the minister said, adding it is now an international one.

It's hoped that the museum will be erected near the National Museum of Korea in Yongsan, the eastern part of Seoul, the minister said, adding that the government plans to immediately start the work by securing a lot for it first."

The minister also said the government will hastily seek the listing of the comfort women as a UNESCO heritage as part of ways to expedite the museum project. 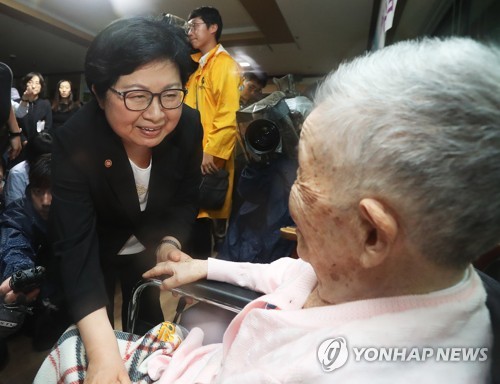 Gender Equality Minister Chung Hyun-back talks with former sex slave Kang Il-chool during a visit to the House of Sharing, a shelter for the former sex slaves, in Gwangju, east of Seoul, on July 10, 2017.

Chung's remarks are a sharp departure from the stance of the former Park Geun-hye government on the issue, which declared the "final and irreversible" resolution of the comfort women issue in a December 2015 deal with Japan. In exchange, Japan provided 1 billion yen (US$8.76 million) to a foundation dedicated to supporting the victims. The organization was launched last year.

South Korean President Moon Jae-in told Japanese Prime Minister Shinzo Abe in a telephone conversation made soon after his inauguration in May that most South Korean people could not "emotionally" accept the deal, strongly hinting at a possible renegotiation of the deal.

During her parliamentary confirmation hearing, Foreign Minister Kang Kyung-wha, who had long worked in U.N. human rights organizations, also said doubts linger over whether the agreement was surely based on "a victims-oriented approach."

Many Korean people censure Japan for refusing to recognize its legal responsibility for the forced mobilization of the women. They also criticized the deal being hastily arranged without sufficiently listening to the opinions of the victims.

Since the conclusion of the deal, however, Tokyo has called on Seoul to faithfully implement it, insisting that the issue has been completely settled amid the international community's high evaluations.

Historians estimate that more than 200,000 women, mostly Koreans, were forced to work in front-line brothels for Japanese soldiers during the war. Korea was under Japanese colonial rule from 1910-45.