South Korea and the United States are expected to launch a key consultative body to speed up denuclearization and coordinate the tempo of sanctions on North Korea.

In their talks here last month, Lee and Biegun agreed to establish a bilateral "working group" to discuss major elements related to the North. The working group will have "systemic and regular" consultations on denuclearization efforts, sanctions implementation and inter-Korean cooperation, the two sides announced.

The allies are likely to have the inaugural session of the working group during Lee's three-day visit to the U.S., a diplomatic source said. 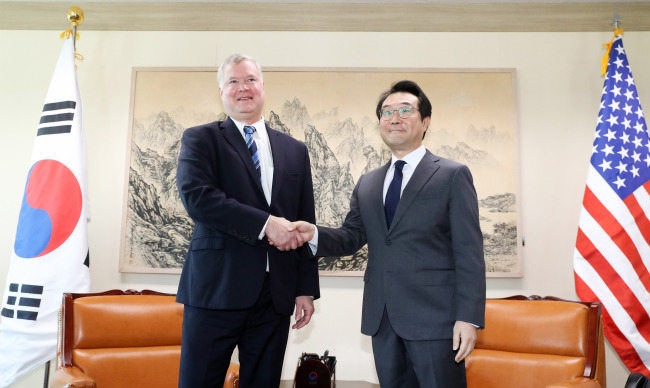 Lee, special representative for Korean Peninsula peace and security affairs, will lead the South Korean side at the working group.

On his visit this week, Lee is accompanied by several representatives from the presidential office and the Ministry of Unification that will participate in the team.

"The U.S. is about to set up an organ to directly monitor and control inter-Korean relations. It's an arrogant act. There are no grounds for the U.S. to intervene in the affairs between South and North Korea," Uriminzokkiri, a propaganda website, said in a commentary.

Amid a protracted hiatus in formal Pyongyang-Washington talks, concerns have grown about whether Seoul and Washington are in lockstep on sanctions on the communist regime.

Brisk dialogue is going on between the two Koreas. But their agreed-upon joint field survey of a railway passing through the Demilitarized Zone (DMZ) has not begun yet. It was supposed to start in late October.

The Koreas want to modernize and reconnect the railroad between Seoul and Sinuiju, a North Korean city close to China.

The U.S. has reportedly taken a dim view of the measure that may undermine efforts to strictly implement the U.N.-led sanctions until the complete denuclearization of the North.

The North has demanded reciprocal steps from the U.S. for its halt to nuclear and ballistic missile tests and the closure of the Punggye-ri nuclear test site.

It remains unclear when the U.S. will reschedule high-level talks with the North, originally slated for Nov. 8, which have been indefinitely postponed at Pyongyang's call.

In its latest goodwill gesture, Pyongyang announced its decision last week to deport an American citizen held there for alleged illegal entry.

Secretary of State Mike Pompeo publicly "appreciated the cooperation" of the North on the matter.