Gangwon currently uses the Olympic Ski Jumping Centre in PyeongChang, the host city of the 2018 Winter Olympic Games in Gangwon Province, as their home. But for next season, Gangwon said they will play at Songam Stadium in Chuncheon, also a city in Gangwon Province, located some 85 kilometers east of Seoul, after reaching an agreement with Chuncheon city government.

"We've received offers from several cities in the province," the club said. "We decided to go with Chuncheon, which has a stadium meeting our standards."

Gangwon is familiar with the 25,000-capacity Songam Stadium as they played some matches at the venue in 2009. 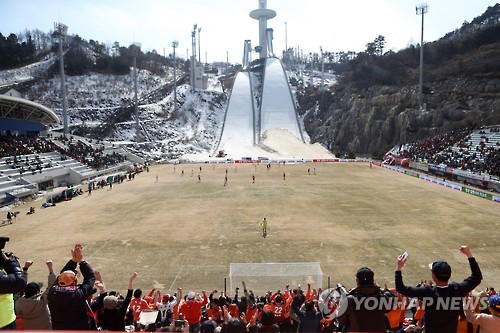 Gangwon previously used Gangneung Stadium in Gangneung as their home ground but after earning a promotion to the top-flight K League Classic this season, they have been playing at the ski jumping center. But since the venue is reserved for the Winter Games kicking off Feb. 9, 2018, Gangwon were forced to find a new home for next season.

Gangwon, currently sixth in the 12-team league, were reportedly negotiating with Gangneung, where their club house is located, and Wonju, some 130 kilometers east of Seoul, for home stadium use but decided to settle in Chuncheon. Gangwon, run by Gangwon Provincial Government, originally wanted the host city to provide 2 billion won (US$1.76 million) in support a year for having the club in the area but the deal with Chuncheon didn't include such a financial clause.

Gangwon expect their new home stadium to bring more fans to their matches. For the first half of this season, the club only averaged 1,335 fans per match, the lowest number among the K League Classic clubs, since PyeongChang is a relatively small county and has accessibility issues for those coming from Seoul metropolitan areas.

A Chuncheon city official said Gangwon may start using Songam Stadium in October since the Olympic Ski Jumping Centre needs to be prepared for the Winter Games next year.