The prosecution on Monday demanded 12 years in prison for Samsung Group heir Lee Jae-yong for bribery and other charges in a massive corruption scandal involving ousted former President Park Geun-hye.

The independent counsel has indicted Lee, the vice chairman of Samsung Electronics Co., in February on charges of providing or promising some 43.3 billion won (US$38 million) to Park's friend Choi Soon-sil.

In return, he secured government backing for the merger of two Samsung units in 2015, a vital step for cementing his control over South Korea's biggest conglomerate founded by his grandfather, according to the prosecution.

The 49-year-old heir to the sprawling business empire is also accused of embezzlement, hiding assets overseas, concealment of criminal proceeds and perjury.

Special Prosecutor Park Young-soo, who heads the investigation, told the court, "It is a typical corruption crime stemming from a back-scratching alliance between politics and business, which has indeed compromised our constitutional values."

"Over the course of the probe, it was difficult to cast away doubts that Samsung, the top firm that accounts for 18 percent of our GDP, exists only for its leader and his leadership transfer," he said.

Part of the bribery charges include the sponsorship of the equestrian training of Choi's 21-year-old daughter, Chung Yoo-ra. The prosecution has claimed that, by doing so, Lee secured a crucial vote from the state-run National Pension Service, a major stakeholder in Samsung C&T Corp., in favor of merging with Cheil Industries Inc.

The merger made Lee the largest shareholder in the combined entity, now just called Samsung C&T, which in turn owns a controlling stake in Samsung Electronics, the crown jewel of the conglomerate with assets worth 350 trillion won. 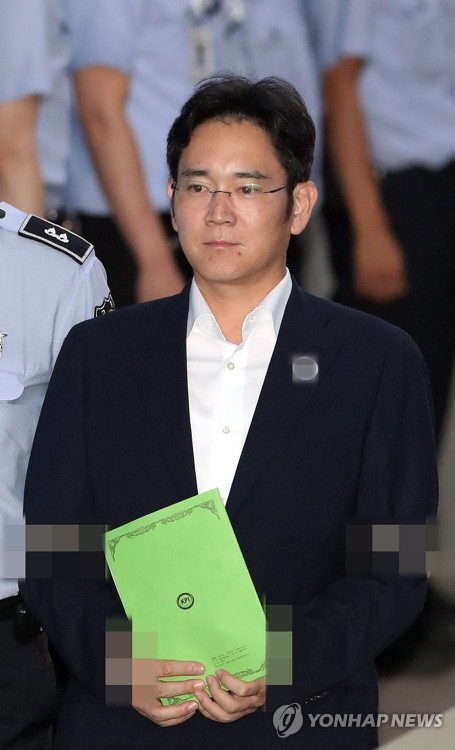 Lee Jae-yong, vice chairman of Samsung Electronics Co., enters the courthouse in Seoul on Aug. 7, 2017, for his trial over bribery and other charges in connection with former President Park Geun-hye.

Lee's legal counsel repeated its claim that all evidence against its defendants is "circumstantial" and that there is no direct evidence to prove the funding was in exchange for business favors.

They stressed that there was no such shady master plan for Lee's succession, like the prosecution claims, since it was taken for granted that Lee would take over from his father.

In the final statement, Lee, in tears, pleaded his innocence by saying he never asked the ex-president for any special favors to benefit his own interest.

"I would never ask the president for something to my own benefit.... However foolish I am, I'm not foolish enough to inflict damage on the national pension, which holds the lifetime savings of ordinary people. That is one serious misunderstanding and I do feel that I'm falsely accused of it," he said.

"Unless such a misunderstanding is straightened out, I cannot be a businessman who represents Samsung."

He was choked with emotion several times in his last five-minute testimony. He apologized every time and tried to calm down by taking a sip of water from a paper cup.

"During the last six months of imprisonment, I felt distressed and victimized. But I tried to use the time as an opportunity to reflect on myself. One thing I have realized is that I had too many shortcomings. I'm responsible for everything."

Lee is viewed as the de facto head of Samsung after his father and Samsung Group patriarch Lee Kun-hee was incapacitated after having a heart attack in 2014.

He has admitted having made the contributions to two foundations allegedly controlled by Choi, but only because he was coerced by Choi and Park.

He also argued he was not in a position to make a management decision for the group. The merger was spearheaded by the control tower based on the judgment that it was best for the company's long-term growth, he has said.

The court plans to deliver its ruling on Lee and his executives at 2:30 p.m. on Aug. 25, which will likely affect the ongoing trials for Park and Choi.

During the hearing, the special prosecution also requested 10 years for three top executives of the group for their roles in the scandal. They are Choi Gee-sung, former head of Samsung's now-disbanded control tower Future Strategy Office; Chang Choong-ki, then its vice head; and Park Sang-jin, a president of Samsung Electronics, for their roles in the high-profile case. It demanded seven years for another executive Hwang Sung-soo.