Actor Song Joong-ki expressed his feelings about the surprise wedding announcement with "Descendants of the Sun" co-actor Song Hye-kyo in a letter published on his fan page Wednesday.

Earlier in the day, the celebrity couple dropped the bombshell that they are seeing each other and will tie the knot on Oct. 31. They previously claimed they were just close friends.

"The situation demanded caution as marriage is a joining of not just two persons but of two families," Blossom Entertainment and UAA, the companies representing the two stars, announced this morning.

In the letter, Song said they promised to each other on New Year's Day to spend the rest of their lives together and wed on the last day of October "to fill each other's holes with love and overcome difficulties together."

On the reason why they denied the dating rumors in the past, he repeated what his management company said, that he wanted to be very "cautious" and respect his family's opinions.

He also said he didn't want to influence the upcoming movie "The Battleship Island" in any negative way with his personal matters.

"I was careful not to cause any harm to the production team which did their utmost to make a successful film on the set," he said.

The actress also left a note on her fan page on Wednesday afternoon asking for kind understanding from fans.

"Joong-ki's trust and faith in me for a long time convinced me that it would be good to spend the future together with him. And I was grateful for his sincerity and true heart, which made me have a faith in him in return," she said.

The two stars played a soldier-doctor couple in the KBS 2TV's hugely successful 2016 series set in the fictional war-torn country of Uruk. The 16-episode drama was sensationally popular not only in Korea but also around Asia, especially in China. At one point, its viewership hit 38.8 percent on its home turf.

Rumors of the two dating first surfaced last year when an anonymous Internet user claimed to have spotted them shopping and dining together in New York. 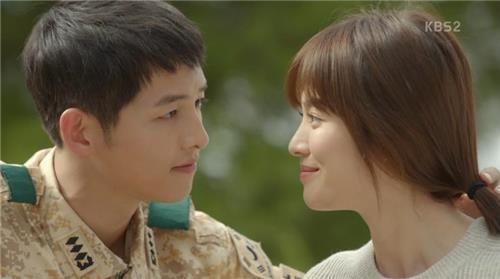 Last month, MBC TV reported that the couple recently vacationed together in Bali, Indonesia. The companies then acknowledged that their stars had gone to Bali but denied they traveled together.

The "Song Song couple" revealed the secret wedding plan to their inner circle about a month ago.

"It's a personal issue so we never asked first, but Song Joong-ki had a serious discussion with us about a month ago, and that's when we started deliberating when to make the announcement," Kim Jung-yong of Blossom Entertainment said.

The wedding news seems to be made public now as to not distract from promotions for the actor's new movie, which comes out later this month.

Since his debut in 2008 through "A Frozen Flower," Song, 32, rose to fame in 2010's "Sungkyunkwan Scandal" and the TV show "Running Man" as one of the original cast members. The actor later propelled into mega stardom from his 2016 work in "Descendants."

Song Hye-kyo, 35, entered show business by modeling in a school uniform commercial in 1996. She has appeared in a wide range of TV shows and movies, including "Soonpoong Clinic," "Autumn in My Heart," "Full House" and "Hwang Jin Yi." 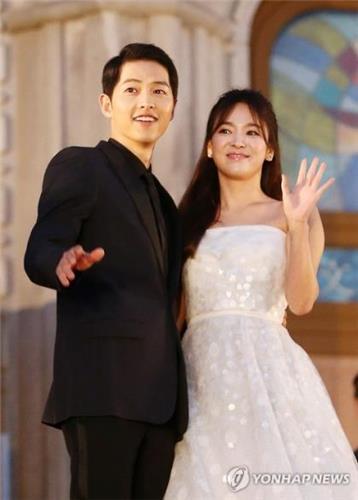