South Korean striker Kim Shin-wook said the national football team is evolving with the new head coach, emphasizing that they will display a different style of football in the upcoming World Cup qualifiers. Kim is one of the 26 players called up by head coach Shin Tae-yong for South Korea's last two matches in the final Asian qualifying round for the 2018 FIFA World Cup. South Korea will host Iran next Thursday and take on Uzbekistan five days later in Tashkent. Kim, who returned to the national team for the first time in five months, said the national team is changing with Shin, who took the helm last month after Uli Stielike's ouster.

"The new coach is implementing a new football style," Kim said to reporters at the National Football Center in Paju, north of Seoul, where he has been training since Monday. "He emphasizes designated set-pieces and organized movements on the pitch more."

Kim, who has 10 goals in 26 matches in the K League Classic this season, is the tallest player on the roster at 196 centimeters. The Jeonbuk Hyundai Motors striker said Shin seems to know how to utilize a target man like him. He has so far scored three goals in 37 matches for South Korea. "It's not easy to build up the plays and organize movements in such a short period of time," he said. "But with this early call-up, we're working on everything from build-up to pressing on the pitch." 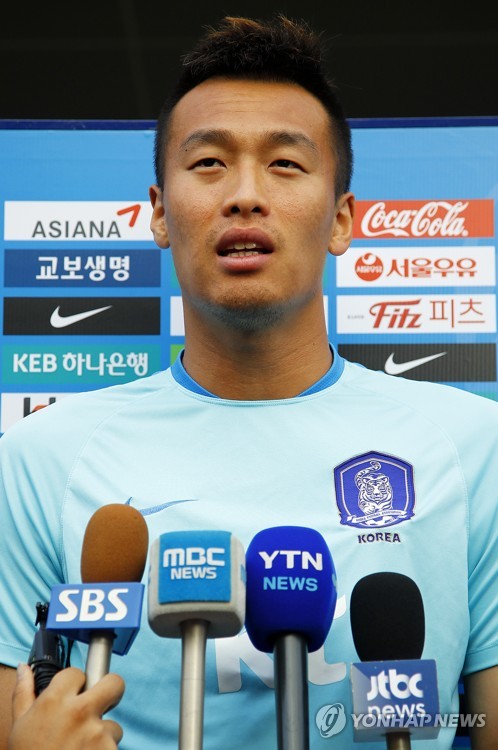 Kim, 29, said Iran are a "smart" team, but the Taeguk Warriors can win this time at home. Since 2012, South Korea have suffered four consecutive 1-0 losses to Iran. Iran have already qualified for the 2018 FIFA World Cup with two matches remaining. They have secured the top spot in Group A with 20 points, seven points ahead of No. 2 South Korea and eight points above No. 3 Uzbekistan. In Asia, the top two team from each group directly advance to the World Cup in Russia.

"Iran also have their weaknesses and I think our good wingers can penetrate their defense," he said. "I think our offensive ability can unlock Iran."