The United Nations has decided to provide North Korea with US$5.9 million to help the country's recovery efforts from severe droughts, according to a news report Tuesday.

The U.N. Central Emergency Response Fund (CERF) has decided to channel the fund to five U.N. agencies in the North, Voice of America reported, citing a press release from the U.N. Office for the Coordination of Humanitarian Affairs.

Of the total, $2.8 million and $2.5 million will be given to UNICEF and WFP, respectively, to address health concerns for drought victims and prevent drought-related diseases.

North Korea's main regions of grain production, including the Hwanghae provinces, have suffered great damage due to a drought that began in April.

A U.N. investigation team reported in July that 16 percent of all farmland in South Hwanghae Province was heavily affected by drought, with 40 percent of the farmland in the Kangryong and Jangyon counties having dried up.

In particular, 59 percent of the farmland in Jangpung County and North Hwanghae was ruined by drought, the team said, adding that rice paddies suffered more damage than corn fields. 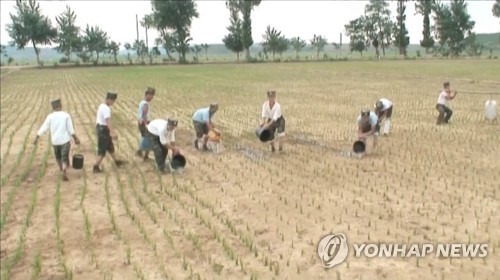