The employment rate for university graduates in 2017 was at an all-time low. Even graduates of technical colleges and graduate schools landed fewer jobs for the first time in three years.

The Education Ministry on Thursday released employment statistics as of the end of last year for 574,009 graduates of higher education institutions who finished their studies between August 2017 and February 2007.

The employment rate was 66.2 percent, down 1.5 percentage points from the previous year and the lowest in the six years since the statistics were first compiled. It was especially bad for university graduates, falling 1.7 percentage points to 62.6 percent.

The rate for graduates of technical colleges had been consistently rising from 67.8 percent in 2014 to 70.6 percent in 2016 but fell to 69.8 percent last year. Employment of graduate school graduates also fell for the first time in three years. 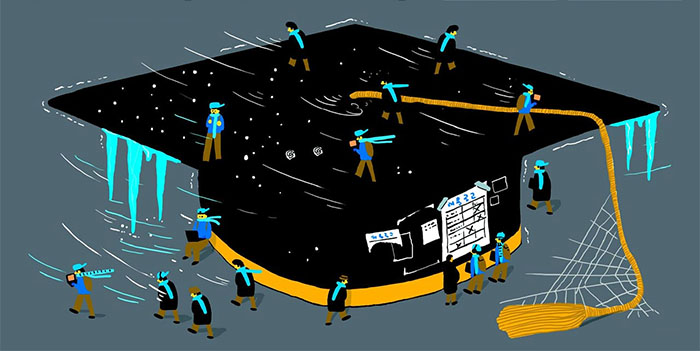 The main reason is a decrease in good-quality jobs. Prof. Cho Joon-mo at Sungkyunkwan University said, "The fact that large conglomerates are hiring less reflects the declining competitiveness of Korea's major industries."

And Prof. Kim Tae-gi at Dankook University said, "There is a vicious cycle where good-quality jobs suitable for university graduates are dwindling, so they spend years trying to find adequate jobs."

"There is too much of a gap in quality between jobs in Korea, and good-quality jobs are increasingly rare," said Oh Kye-taek, at the Korea Labor Institute. "That is why university graduates would rather wait for years and years until they finally get the job they want."

Companies are not expected to make big investments in the next three to five years, but there will be a continued influx of university graduates, which will only worsen the job market situation for graduates, he said.