A senior U.S. senator said Tuesday that a preventive war would not solve North Korea's nuclear threats but rather make things worse, calling for a peaceful way to deal with Pyongyang's continued pursuit of weapons of mass destruction.

"We must acknowledge that a preventive war would not solve this problem, and it would make matters much, much worse," Sen. Edward Markey (D-MA) told a press conference held in Seoul.

"I should say people who live in the region should understand that overwhelmingly American people understand that a preemptive war on Korean Peninsula would turn into a catastrophe, leading to hundreds of thousands, if not millions of deaths," he noted. 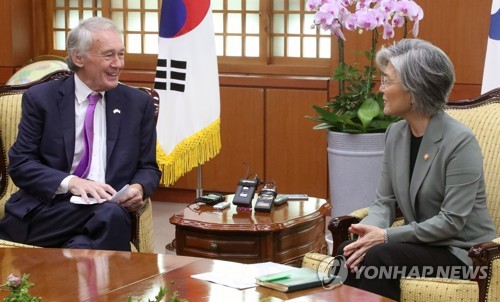 Markey is a ranking member of the Senate Subcommittee on East Asia and Pacific Affairs. He is in Seoul leading a congressional delegation that includes Sens. Jeff Merkley (D-OR) and Chris Van Hollen (D-MD), as well as two members of the House of Representatives: Carolyn Maloney (D-NY) and Ann Wagner (R-MO).

Their trip to South Korea comes as tensions remain high after the U.S. and the North recently exchanged bellicose rhetoric, some of which even alluded to military actions on and around the Korean Peninsula.

He proposed a "two-track" negotiation approach. 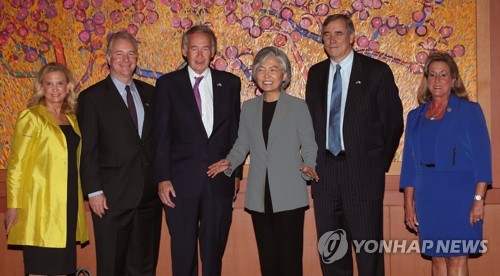 "We must begin direct discussions with North Korea on two closely coordinated tracks. On track one, the United States will lead direct negotiations toward the denuclearization of the Korean Peninsula," the senator said.

"On track two, the Republic of Korea (South Korea) will lead direct negotiations toward social, cultural and inter-governmental relations necessary for the long-term wellbeing of the people on both sides of the border," he added.

Markey still emphasized the need for tougher sanctions to bring the North to the negotiating table, calling on China, the closest ally to the reclusive Pyongyang, to do more to be able to produce more substantial progress.

"North Korea's trading partners must intensify economic pressure to bring North Korea to the negotiating table. That starts with getting China cut off the flow of oil to North Korea. That is the one sure way to have a decisive impact on North Korea's decision-making," he said.

"Later this afternoon, we will depart for China, where we will visit Dandong, the gateway city on the border of China and North Korea," he added. "We hope to learn what our Chinese partner can do to exercise economic leverage to get Kim to the table."

Saying that the existing sanctions imposed on the North are so "porous" and easy to be circumvented, he vowed to seek legislation that would make any countries maintaining economic relations with the North pay a "price," in an apparent bid to put more pressure on China and other traditional allies of the North.

"We've come to the conclusion that the system of sanctions that already exist are too porous and it is too easy for there to be a black market economy, for there to be strategies to skirt the attempt to put a 'closed for business' sign on North Korea," he said.

"So we are going to be returning to Washington with the goal of constructing legislation that can ensure that China and other countries in their economic relations with North Korea understand that there will be a price that will be paid economically," he added.