After more than 6 decades, 89 families from North and South Korea got to reunite after years of separation. These families lived years without knowing about their siblings, parents, friends, etc. It is estimated that about 132,600 individuals in South Korea come from separated families; families who remained in North Korea. Out of the 132,600 Koreans, more than 75,000 of them have died. Many of these Korean families dream of the day they get to see their loved ones but unfortunately numerous of them do not get the chance to by the time that an agreed meeting occurs.

On August 20-26, the reunions took place at North Korea's Diamond Mountain Resort. This was the first reunion in about three years. But, it is significant because it is the first reunion after the improvement ties among North and South Korea. After President Moon Jae In met with Kim Jong Un, both promised to restore communication among families. The picture captures the beautiful moment two brothers met after being separated for years.

President Moon stated that the reunions among both Koreas will be held more often and regularly and include exchanges of visits and letters. For those that may not have known, President Moon himself comes from a separated family from North Korea's eastern port city Hungnam.

"Whenever my mother passed by a young man of his age, she would run after him calling out my brother's name."

Chung Hak-soon recalls the day that lost her older brother during the war. "The village elder came looking for him", Chung said. "He was 16 years old." She said, "my brother asked what he wanted, but the elder just told him to follow. That was the last time I ever saw him."

The war brought a lot of pain and divisions among families. The more the war tensified the harder it was for Koreans. Many Koreans fled to hide in caves to protect themselves against Chinese and North Korean soldiers. Chung was merely 10 when she, her mother, and two other siblings fled to the mountains until reaching a U.N. line greeted by American soldiers.

Although the fight ended soon after, Chung lost her brother. It was difficult for North Korean refugees to assimilate in South Korea. Chung's mother was haunted by the loss of her son. So much so that whenever she passed by a young boy his age, she would run after him calling out her brother's name, in the hopes that he also escaped. But it was never him.

Chung's mother cried every time and she died without ever seeing her son again.

When the news of an upcoming reunion came out, Chung applied immediately. When Red Cross contacted Chung, her eyes filled with tears. Her bother survived the war, but passed away years ago. However, he left behind a famly. Chung wanted to meet her nephew and sister in law. A picture of Chung's sister in law and nephew as they waved goodbye to her on the bus. During their meet they were able to talk about her brother and his way of life. Chung's sister in law told her that he lived a good life and he died thinking his family were killed in the war because he wasn't able to find them back home.

Although time has passed since the Korean war, the trauma and pain of those who were torn away from their families lingers. Families were separated with no guarantee that they will meet again. The only thing left behind are the memories from their loved ones.

Tears flowed as these separated families met for the first time. Imagine being separated from your mother and not being able to contact them or have any form of information about them. The agony and pain is unbearable..... Two siblings were separated from their mother and spent more than 6 decades without knowing about them. Han Shin Ja, the 99 year old mother was separated from her two daughters who are 71 and 72 years old. The reunion brought the bittersweet moment they were finally able to embrace one another. 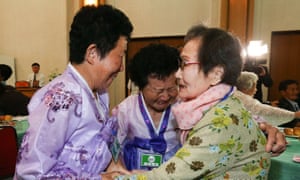 The reunions only lasted about 11 hours. These families went years of not spending time with their family members to only seeing them for 11 hours and having to return back home. Many of them knowing that this might be the last time they see each other.

Hopefully this is the beginning of many reunions. As President Moon stated, “Expanding and accelerating family reunions is a top priority among humanitarian projects to be carried out by the two Koreas.”